Economic Contributions of the Florida Citrus Industry in 2018 - 2019

The Florida citrus industry encompasses a range of economic activities, including fruit production in 27 counties of central and south Florida, fresh fruit grading, packing and shipping to domestic and international markets, fruit processing for juice extraction and bulk shipment, and juice packaging for retail distribution. Florida citrus bearing grove area has declined from over 750,000 acres in the year 2000 to around 387,000 acres in 2019, a reduction of 48 percent, while production volume utilized has declined by 74 percent, primarily due to losses from citrus greening disease (also known as Huanglongbing or HLB), which entered the state in 2005. The purpose of this study is to estimate the economic contributions of the citrus industry to the State of Florida in marketing year 2018-19 and to provide comparisons to marketing years 2017-18 and 2016-17. The analysis was conducted using the IMPLAN© regional economic modeling system and associated databases (IMPLAN Group, LLC) with modifications for multi-industry contribution analysis (Cheney, 2016), to estimate the broad regional contributions of the industry, including economic multipliers that capture the economic activity generated in other sectors through the industry supply chain and by re-spending of income earned by employees of directly and indirectly supported industries.

During the 2018-19 marketing season, 76.9 million boxes of citrus fruit were produced in Florida, including 71.4 million boxes of oranges, 4.5 million boxes of grapefruit, and 1 million boxes of specialty citrus, of which 7 percent was sold in the fresh market and 93 percent was utilized for processing. The total grower value of citrus fruit was over $1.090 billion, with fruit for processing valued at nearly $986 million and fruit for fresh consumption valued at nearly $103 million, based on delivered prices. Florida citrus juice processors produced 658 million gallons of citrus juice in 2018-19, with a total producer value of $2.705 billion (free on board [F.O.B.] price basis). Florida citrus processors also produced byproducts of citrus pulp, meal, molasses, and the essential oil d-Limonene, valued at over $97 million.

The economic contribution analysis estimated total industry output contributions of $6.531 billion, including $2.130 billion from citrus fruit production, $4.327 billion from citrus juice manufacturing, and $75 million for fresh citrus marketing. The citrus industry supported a total of 37,431 fulltime and part-time jobs in the state. Total value-added contributions, estimated at $2.727 billion, represent the industry’s contribution to Gross State Product. Labor income contributions amounted to $1.599 billion, representing earnings by employees and business owners. Total state and local tax contributions of the Florida citrus industry were $139 million. The Southern production area had the highest share of citrus industry employment contributions (11,160 jobs), followed by Western (8,725 jobs), Central (6,789), Northern (4,862 jobs), Indian River (2,799 jobs), and the rest of Florida (3,096 jobs). When compared with estimates for the 2016-17 and 2017-18 seasons, results suggest that the Florida citrus industry is likely still recovering after significant losses due to Hurricane Irma in 2017-18 and continues to be impacted by citrus greening disease. 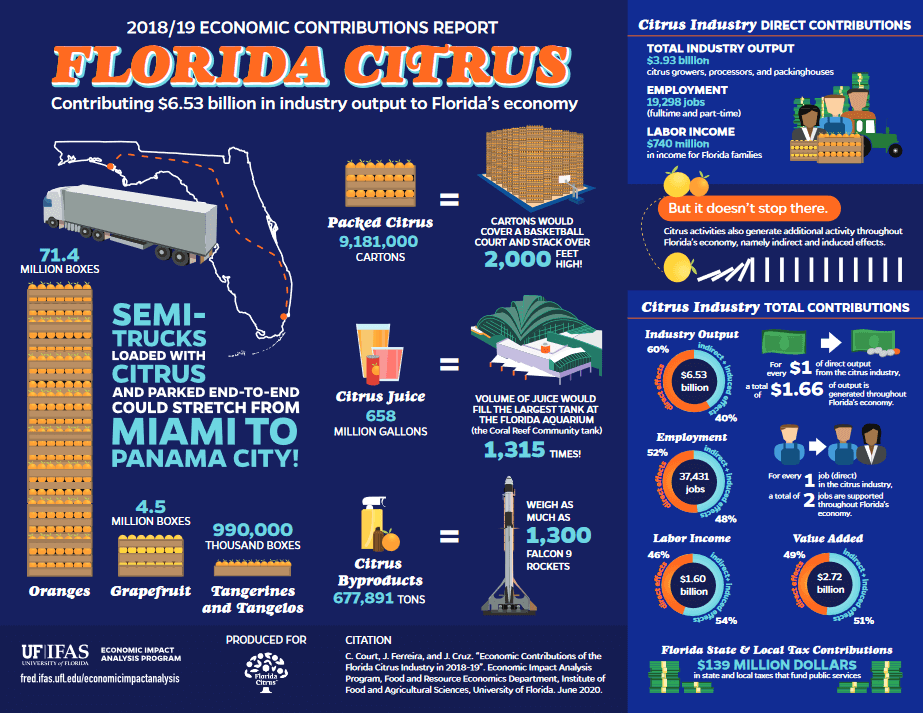